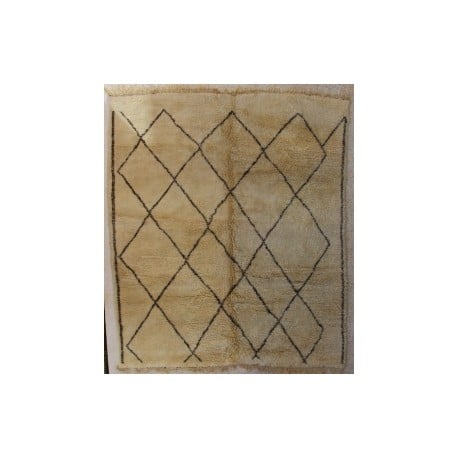 BENI OUARAIN RUGS, NO TWO ARE ALIKE! Beni Ourain carpets are considered the most prestigious rugs in Morocco, made from the very finest wool. every piece you take is the only piece, one of its kind." These rugs are luxurious and perfect for any sort of home design. Beni Ourain rugs are authentic tribal rugs fully hand-woven by women of the Beni Ourain and other neighbouring Berber tribes that reside in the North-Eastern Middle Atlas Mountains of Morocco, in the current Tazekka National Park, a province situated between Guercif, Taza and Sefrou cities. BENI OURAIN RUGS TRADITIONAL USE : Winter is rough in the Moroccan Atlas Mountains where the lowest temperatures in Africa are observed. To protect themselves from the cold, Beni Ourain tribes, who lived in traditional tents, had no alternative other than to produce thick wool rugs to insulate themselves from an hostile environment. The Beni Ourain rugs were not intended to have a decorative purpose, they were traditionally used as bedding and blankets to keep them warm with their thick pile. Few decades ago, the Beni Ourain rugs were confined in Berber tents of the Atlas Mountains, this confinement is definitely broken in the early twentieth century under the French protectorate. Nowadays, they are used all over the world in refined interior decoration, as a very chic and fashion floor covering. BENI OURAIN RUGS WOOL : Beni Ourain rugs are made of pure sheep's wool of high quality featuring shining pile of golden and ivory highlights ; one of this best organic wool is produced out of a unique rustic Berber sheep breed around the ancient race called ‘Marmoucha'. The Beni Ourain tribes excel in selecting softer and silkier wool during a harvesting that could last several years before gathering enough wool to make some rugs. PATTERNS AND COLORS OF BENI OURAIN RUGS : Because of their landlocked and mountainous location in the northern Middle Atlas, the Berber tribes of Beni Ourain have never been influenced by the Arab-eastern designs .Their rugs have kept their originality, reflecting archaic appearance of minimalist designs, composed of black and brown asymmetric patterns of diamonds,lines and triangles, in an off-white, cream background. BENI OURAIN RUGS MEASURES : Because the Beni Ourain tents have a rectangular form, the carpet should normally cover the complete interior space of the tent. Nowadays, Berber houses have long narrow rooms so the rugs tend to be long and not very wide. As a result, these rugs are approximately 4 meters long by 2 meters width. The weight ranges from 40 to 65lb. and the height of the wool spread from 25 mm to 50 mm. Logically, a rug of more than 2.20 meters width is not an antique Beni Ourain carpet. Nowadays Beni Ourain rugs are becoming increasingly popular in contemporary homes as they can be weaved in any size. BENI OURAIN, A SOURCE OF INSPIRATION... The Beni Ourain rugs very artistic designs have inspired many European artists such as Alvar Aalto, Le Corbusier (who matched the Berber rugs with sleekly designed furniture), Paul Klee and , as well as most famous modernist architects in the 1920's and 30's . They got trendy by Henri Matisse, who called them "The huge whites"

For other configurations or specific requests about this product:

* Should an article be priced incorrectly on our website, despite our greatest care and attention, the correct price is the official one as listed in the most recent product catalogues of the brands we offer. All prices on Designcollectors are including 21% VAT. The costs of administration, packaging and insurance are included. Over € 250, transport to some 30 countries is free of charge. For orders below € 250, there are additional shipping charges, according to the destination. Companies abroad can purchase all products from Designcollectors excluding VAT.

You'll be the first to hear about new arrivals, exclusive offers and promotions. We love inbox zero too, so our newsletter is only sent out periodically. Here's an example to get an idea